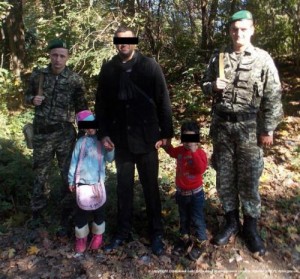 In the frames of activities aimed on counteraction to illegal migration, border guards of Chop Detachment detected illegal migrants from Asia last weekend.

The man and two children – 6-year-old girl and 4-year-old boy were stopped by the law enforcement agents in the area of BS “Uzhgorod”. According to the words of the man, he and his children, who, by the way, were dressed in light clothes, were the migrants from Iran. No document was presented, however, he mentioned that they made their way to Slovakia, and from there they intended to get to Austria. The route through the border had been planned already in Iran by means of the Internet.

The border guards delivered the violators to the subdivision. In a result of medical examination it was established that the health state of the father and his children is satisfactory. So far, their personalities are under establishment. The further destiny of the detainees will be defined by the court.