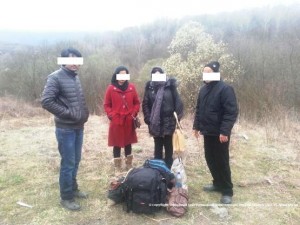 Border guards of Chop detachment detained four illegal migrants from Asia in the area of BS “Novoselytsya”.  Information about appearance of unfamiliar persons in the border area was received from local inhabitant. The man reported that there were four persons with rucksacks moving towards Ukrainian-Slovakian border. The reaction group operated promptly and consistently and in some minutes the unfamiliar persons without documents were apprehended. According to the words of the detainees, three of them were citizens of Afghanistan (1 man and 2 women), and one more was the citizen of Pakistan. Detainees were delivered to border subdivision aiming at drawing up administrative and procedural documents for attempt to cross the state border.

Decision on responsibility before the law and their further destiny will be defined by the court.