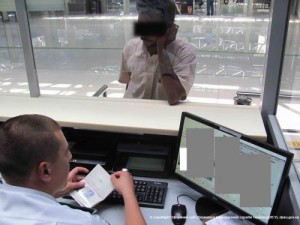 Border guards of Separate check point “Kyiv” in the airport “Boryspil” detained a person with forged Italian passport. Among the flow of the passengers arrived from Tegeran, border guards detected 33-year-old man while he was presenting his passport of the citizen of Italy for the passport control, which contained the signs of the forgery. However, the passenger insisted on the validity of the Italian passport. Later on, in the course of the interview the man confessed that he was the citizen of Iran. The forged passport was sent by his father residing permanently in Italy. Soon, the violator will be returned by back fly.

One more citizen of Iran was apprehended by the border guards of BS “Shegeni” , Mostytskyi Detachment 200 m before the border . Having no visa to the neighbouring country, the man decided to avoid the check point. By the court decision he was fined for the sum of 2 500 UAH. Besides, this citizen is banned to enter Ukraine for the terms of 3 years.