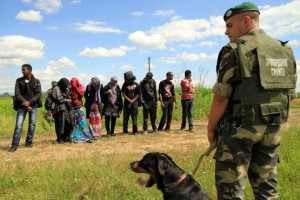 Border guards of Mukachevo Detachment have apprehended 655 illegal migrants during this year. It was reported by the head of Mukachevo Border Detachment Sergey Melnyk at the joint press-conference of directors of Border Department and Customs in Transcarpathian region.

According to his words, the flow of illegal migrants through the border of Ukraine has been increased in ten times. In the course of the previous year in total 69 illegal migrants were detained by the border guards. At the same time the head of Chop Border Detachment Ivan Chaplinskyui marked that the flow of migrants from territory of Ukraine to EU does not constitute a particular risk for neighboring countries.
Source: http://www.ua–reporter.com/novosti/181462