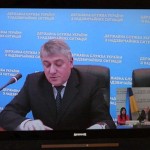 More than 4 thousand citizens departing the Crimea and ATO areas in Donbas have settled in Transcarpathia.

Lately, the number of people has sufficiently increased, who wish to cross the demarcation line in Donbass towards the controlled Ukrainian territory. In this connection, as well as due to ambient temperature fall, the actual is a creation of appropriate conditions for people at the check points, in particular heating points deployment.

This was discussed during the next meeting of the Interagency Coordination Staff on issues related to the welfare of citizens, being moved from the temporarily occupied territory and areas of ATO, which was held on November 19.

Headed by the First Deputy Chairman of the State Service for Emergency Situations Oleg Melchutskim, the following persons participated in the meeting: Deputy Chief of SSES of Ukraine in Transcarpathian region Bogdan Ilkovich, heads of departments of the Transcarpathian Regional Administration and representatives of the Regional Council of Veterans and the Public Organization “Transcarpathia-Donbass”.

In the course of the meeting the experts considered the issues regarding the welfare and protection of internally displaced persons, in particular the arrival from the ATO areas, temporary accommodation, employment, solving other everyday problems. The state of the legal, social and medical support for people was also analyzed, who were affected by fighting in the ATO areas and improvement directions of normative legal acts on social protection of internally displaced persons.

According to the official data, Transcarpathia has already accepted 4041 citizens from the Eastern Ukraine and Crimea, of which 1014 – are children. Of total 3762 people arrived to our region from Donetsk and Lugansk regions and 279 – from the occupied peninsula. All citizens who have applied to the regional headquarters were provided with the temporary housing.

3718 people applied for the appointment of a monthly targeted assistance residence (3663 persons were assigned allowance, 26 – appointed is continued, 29 – were denied). Through collaboration with UNHCR has allotted one-time assistance for 164 families for the sum of 910 000 UAH.