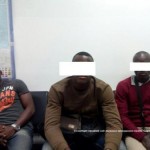 Three citizens from Cote d’Ivoire arrived to the international airport Boryspil. The foreigners told they came to undergo competition selection to one of football clubs in Sumy. In the course of the verification activities it was established that they even have not played football in their country of origin, and also they do not orient in any issues on this point. The players had sportswear being not corresponding their sizes among their stuff. Besides, the “footballers’ were unable to explain the aim of their trip to Ukraine in the course of the interview. Thus, the staff of State Border Guard Service rejected the citizens of Cote d’Ivoir to enter Ukraine.