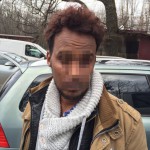 A group composed of five illegal migrants – two Somalis and three Vietnamese were apprehended in the suburb of Uzhgorod at the Ukrainian-Slovakian border.

As it was managed to establish, the groups was living for a certain period in the vicinity of the capital, and from there they intended to get to the west of Ukraine by taxi. They planned to reach Slovakia from here, and the final point of destination of their trip had to be Germany. The migrants wanted to stay there hoping to be granted social payments.

However, their illegal journey was stopped by law enforcement agents nearby the Slovakian border. Administrative protocol was prepared as to the detainees in compliance with the Article 204 of Ukrainian Code on Administrative Infringements (Illegal cross or state border illegal crossing attempt). So far, the group of illegal migrants is in the Chop Border Detachment.