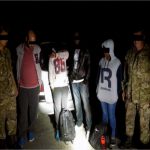 Border guards of Mukachevo Detachment suppressed the attempt of unlawful cross of the state border on Hungary by the citizens of Congo and Guinea when realizing operative information. Thus, the border guards of BS “Kosyno” getting operative information started immediately to the place of supposed violation with the purpose to exclude illegal cross of the state border. The law enforcement agents found the car driven by the citizen of Algeria during the locality investigation. There were also two citizens of Guinea and one from Congo inside the car. After the check, two of them started to run away towards the border. However, in a result of coordinated actions the violators were apprehended and then delivered to Border Department “Kosyno”. After conducting filtration measures it is established that detained citizen of Algeria and woman from Guinea stay on the territory of Ukraine on legal basis, intending to organize unlawful cross of the border for the natives from Congo and Guinea.

Appropriate administrative documents are drawn up with regard to the persons intending to cross the border in illegal way. Competent authorities were informed concerning the citizens attempting to organize the illegal trip and a statement was forwarded as to Part 2 Article 332 of CCU “Illegal transportation of persons through the state border of Ukraine”.