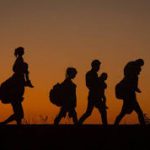 Quite few illegal migrants were transferred by well-conceived scheme to the EU.

Since the beginning of 2016 6 suspicions were declared on smuggling cases across the state border of Ukraine within the Transcarpathian region. Processes of illegal migration remain to be threatening, in particular the activity of “Afghani” channel, attempt to set the relocation channel for the citizens of Sri Lanka and India as well as attempts to establish the channel of illegal migration for the citizens of Bangladesh.

The channels are relevant in the areas of Velykyi Bereznyi, Vynohradiv, Perechyn and Beregovo districts. The scheme is the following: the citizens of Afghanistan arrive to Ukraine from the territory of Russian Federation, mostly in illegal way, and reside for a certain period in Kiev or Odessa. After forming a group of 4-6 persons, their dispatch by vehicle is organized to the suburbs of the populated areas within Transcarpathia region aiming to transport them to Slovakian or Hungarian Republics. The routs remain invariable and go through Serednoveretskyi, Uzhotskyi and Torunskyi passes. Activity regarding illegal transportation of Sri Lanka’s citizens is mostly relevant within the areas of Beregovo and Vynohradiv districts differing by their formation into the group on the cities of Kharkov, Lvov, Kyiv or Odessa, from where their delivery to Transcarpathia is organized. Sometimes attempts to cross the border are performed by persons being in the procedure of refugee status obtaining, which are actively used for legal stay in Ukraine. Besides, recently the attempt of illegal smuggling through the state border increased regarding the citizens of Bangladesh, which, first of all, is connected with instability of social and political situation in the countries of residence. In majority of cases, the composition of these groups is small – as a rule 3-5 persons. These are men of the age 20 to 40 years old.

Illegal migrants are delivered to Transcarpathia secretly and at night time to the suburbs of the border populated areas. Then, the guides may accompany them inside the neighboring country and also just to the border line, from where the group moves on its own. Such violations are most likely to happen during holidays, weekends or days before holiday, as a rule in midnight, at dawn and in the first part of the day.

Only one educational establishment has received a license for study – Uzhgorod national University. At the present moment there are 462 foreign students, of them 372 – from India, 17 – Zimbabve, 14 – Bangladesh, 15 – Nigeria. The majority of the foreigners, 428, study at Medical Faculty, 17 – at Faculty of Dentistry. In the course of the entire period from this University no student was apprehended for attempt or cross of the state border.