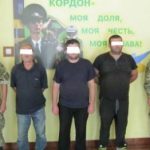 Three travelers from Georgia were detained by border patrol at the border on Romania. Local residents noticed the foreigners in the border area and immediately informed the border guards on this point. Three men were stopped by border detail in the suburb of Dilove village, Rakhivskyi region. All of them had foreign passports of the Georgian citizens. During the interview they confessed in their trip to the neighboring country. Administrative protocols were drawn up as to the violators, which were handed to the court. It should be added that these persons arrived to Ukraine in established order.