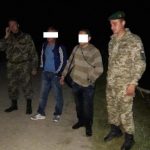 The servicemen of BS “Grushiv” of Lviv Detachment prevented the next attempt of illegal border crossing by two violators. Thus, at about midnight officers received information from the local resident about presence of two unfamiliar persons nearby the populated area Lypovets. Border detail immediately started to the place and detained two citizens of Georgia, 1973 and 1994 DOB. The men had identifying documents, however, they did not deny their intention to reach of the countries of European Union, making the route by means of the Internet beforehand. Detainees were delivered to Temporary Detention Centre in order to establish the circumstances of the infringement and draw up administrative protocols.