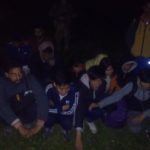 Thus, border guards of Chop detachment detained illegal migrants in the evening in the result of processing received information about possible border cross nearby the village of Kamyanytsya. In the course of territory examination, Ukrainian and the group of illegal migrants were detected. Seeing the law enforcement agents they attempted to hide and dispersed. Organizing cooperation with departments “Novoselytsya”, “Uzhgorod” and Mobile Border Post “Chop”, about a dozen of border details started to the place closing all possible ways of migrants’ move over the border. Interacting Agencies and neighboring dise were informed on this point. In a result of searching actions, being performed at night, 16 citizens of Asian appearance – 14 men and 2 women – were detained. Persons were delived to Border Subdivision. According to the results of conducted filtration measures it was established that 9 of them were citizens of Vietnam, 3 – Sri Lanka and 4 – India. So far, information on the citizen of Ukraine is verified as to whether he was their accomplice in illegal travel to the countries of European Union.

Besides, four persons of Asian appearance were apprehended in the suburb of Uzhgorod, who made their way towards the border. Detained man and four women, being without any documents, introduced themselves as the citizens of Vietnam. At the present moment violators are delivered to department of BS “Uzhgorod” aiming at persons’ identification and drawing up administrative and procedural documents.