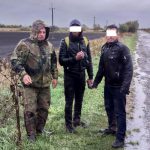 In the frames of Border Operation “BORDER-2016” border guards of BS “Belz” detained two citizens of Morocco, who attempted to cross the state border from Ukraine to Poland in illegal way. The men were exposed by the border guards with the help of local residents of Zabolottya, Sokalskyi district. They informed the border guards about the appearance of unfamiliar persons in the village asking about the location of the border line. During the check the men had identifying documents. Also, they mentioned as if walking at the border with tourist purpose, however, they blanked out in their statements – in one case the tourists were from Lvov, in the other one – they were students from Kharkov. So far, detainees are delivered to Border Department to clarify all circumstances.