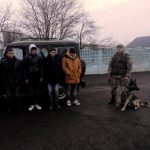 Border guard of BS “Luzhanka”, Mukachevo Detachment, apprehended a group of persons of Asian appearance. While processing operative information about possible illegal cross of the state border, four men were revealed by law enforcers in the suburb of the village in Berehovo region. The detainees presented the passport of Turkish citizens and informed that they intended to get one of EU countries. They arrive to the territory of Ukraine legally. However, then arranging several routes to reach cherished Europe they decided to cross the border namely in Transcarpathia. So far, administrative protocols are drawn up as well as the circumstances of illegal trip are under investigation. The case on this infringement will be handed to the court.