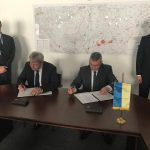 Meeting of authorized head border guards of Ukraine and Hungary, Victor Nazarenko and Zholt Khalmoschi, took place in Budapest. Events occurred in accordance with the Agreement between Ukraine and Hungarian Republic on Ukrainian-Hungarian State Border Regime, Cooperation and Mutual Aid in Border Issues. During the meeting the Parties reported that the solution of problems at the joint border was performed on professional level and based on the principals of mutual respect. Border service was conducted rhythmically with steady upward trend. In total, in the course of 10 months of the current year there were detained 384 migrants (2015 year – 828). However, the Afghan channel remains too still active, which is testified by detention of 132 natives from Afghanistan (2015 – 389), as well as attempts of smuggling Indians citizens who were apprehended this year in amount of 61 persons (2015 – 0). Altogether the number of Syrians has significantly reduced – only 11 persons were detained (2015 – 150).

The Parties confirmed the relevance of a common threat evaluation as an effective mechanism of situation forecasting at the Ukrainian-Hungarian border. In addition, participants expressed positive assessment of cooperation between Ukrainian and Hungarian border guards during joint operations coordinated by Frontex Agency, including «Focal Points». At the end of the meeting the Parties Minutes of the Meeting and Action Plan of cooperation development between the border agencies of Ukraine and Hungary for 2017.