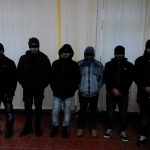 Six illegal migrants were apprehended by the border guards of BS “Luzhanka”, Mukachevo Detachment, in Transcarpathia. The staff operative border subdivisions received information about strangers’ appearance in the area of Beregovo. Soon, the reaction group detected and detained 6 undocumented persons close to the border. Five of them were the citizens of Bangladesh, and one from India. Detainees were delivered to Border Subdivision, where protocols were issued as to the foreigners according to the Article 202 of Administrative Infringement Code of Ukraine (attempt to cross the state border). All detainees were of 18 to 27 years old. They reported to have intention to improve their living conditions in one EU countries.  Also, in the course of filtration measures it was established that on the New Year’s Eve these persons had already been detained in Transcarpathia for illegal cross of the state border. The case was passed to the court for making legal decisions as to the violators.