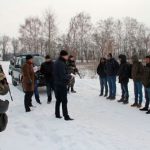 The whole group of migrants and their assistants were detained by law enforcers in Transcarpathia region servicing in the controlled border area close to Romania. The citizen of Sri Lanka Republic, resided in Chernihiv, was the key defendant in the case. He was apprehended at Kyiv railway station. When performing searching actions, there were found 90.5 ths. UAH and $305. As it was established by the investigators, these means were received by the man for smuggling three citizens from India to Hungary, arrived to Ukraine from Russia. To realize his plans, the foreigner entered into a criminal conspiracy with two residents of Ivano-Frankivsk region. Receiving from Indians $500 deposit, he handed illegal migrants over to its accomplices, who took them to the western border. all group of migrants and assistants were detained by the low enforcement bodies in Transcarpathian region in the controlled border area on Romania. the organizer of illegal business, upon court decision, was put to Chernihiv pre-trial detention center, his accomplices from Prykarpatttya were released on bail. Illegal migrants from India were placed to Detention Centre in Mukachevo Detention Centre. So far, the materials of criminal proceeding are in the court for decision making in regard with the defendant in the case and their bringing to responsibility as to Article 332 of Crime Code of Ukraine – illegal transportation of persons through the state border of Ukraine, which is stipulates for 3 to 5 years of imprisonment.