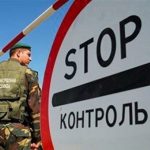 During servicing border detail discovered a man intending to get beyond the check point unnoticed, behind the truck. The reaction group detained the violator and delivered him to the Border Department “Uzhgorod”. As it was established, detainee was the citizen of Moldova, he planned to get to the countries of European Union in illegal way aiming to be employed. After drawing up corresponding procedural documents and holding liable, the “traveler” was handed over to Temporary Detention Centre of Chop Border Detachment.