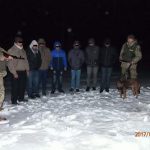 The staff of BD “Syanky” guarding the part of mountain area of the state border on Poland at the boundary of Lviv and Transcarpathia  regions, in the course of implementation of special operative actions, received information about the group of unfamiliar persons within the border area. In particular, the local residents of one of the border villages informed the district inspector about appearance of Asian citizens, probably illegal immigrants. Border guards immediately sent a reaction  group to perform verification and enaged stand-by forces for their search.

After a while, border patrol discovered and detained seven men not far from the state border, according to their words, citizens of the the People’s Republic of Bangladesh. There were no documents identifying the citizens, the the travelers had only stuff and food for further crossing of the border.

Currently, the detainees are taken to the border department, materials on administrative infringememnt are composed regarding the attempt of Ukrainian state border’s illegal break.
Also measures are taken to establish persons involved in the smuggling of illegal migrants across the border. The decision on the foreigners’ case will be made by the court.