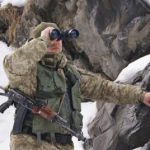 Citizen of Turkey was apprehended by the border guards of Lviv Detachment together with the members of Public Formation. The members of PF informed about stranger’s appearance, which assist law enforcers in guarding the state border. border detail of BD “Parkhomenko” stopped the man during his trip to Ukrainian-Polish border 1.5 km before the state border line. Detainee had passport for travelling abroad of the citizen of Turkey and he arrived to Ukraine in established order.