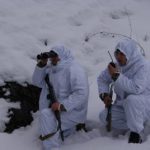 Active cooperation of State Border Guard Service with border guards of countries neighboring Ukraine gains new results and continuous to provide positive results. Thus, an illegal migrants was apprehended in a result of joint patrolling and information exchange between SBGS of Ukraine and Border Police Bureau of Slovakian Republic. The violator passed through Ukrainian-Slovakian border was revealed and stopped by border patrol composed of Ukrainain and Slovakian border guards. Detainees introduced himself as the citizen of Syriya.

It is worth mentioning that recently it was stated at the meeting of Head Border Authorised Representatives of Ukraine and Slovakia that decisions on counteraction to violations at the joint border maintain its actuality, especially in the sphere of counteraction to illegal migration. Besides, it was reported that the situation had been characterized by active actions of crime groupings as to illegal migrants’ smuggling. Thus, last year Ukrainian border guards detained 272 migrants at the border on Slovakia, and due to the cooperation of operatie bodies of both departments it was managed to discrete more than 10 channels of migrants’ smuggling originating from the Near East, southern-Eastern and Central Asia. The performed analysis points to migration activity preservation, as the border guards of Chop Detachment detained already 31 illegal migrant this year.