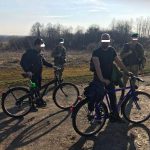 Border guards of Lviv Detachment apprehended two citizens of Turkey. Public Formation assisting law enforcers in border protection informed about appearance within the border area. Border detail of BD “Pavlovychi” stopped men on their way to Ukrainian-Polis border 50 m before the border line. The foreigners planned to cross the border beyond the check point by bikes. Detainees had foreign passports of the citizens of Turkey. During verification it was learned that they intended to cross the state border, however, their attempt failed. So far, administrative protocols were issued as to the foreigners for the attempt to cross the state border, the case is forwarded to the court.