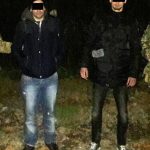 In the frames of joint border operation “Border-2017” border guards of BD “Luzhanka”, Mukachevo Detachment, apprehended two illegal migrants attempting to cross the border on Hungary. Thus, in the course of operative information realization with regard to possible violations of the state border, the border detail fixed the motion of two unknown persons towards the border by means of thermal image device. Border guards stopped illegal migrants in the distance of 70 meters from Ukrainian-Hungarian border just when one of them tried to overcome the barrage fence. Detainees did not have any documents, however reported to be citizens of Algeria. The foreigners were delivered to BD “Luzhanka” in order to perform filtration procedures and drawing up protocols on administrative infringements. Currently, actions are performed as to establishments of persons involved in organization of illegal migrants’ trip. Further destiny of the travelers and legal assessment will be determined by the court.