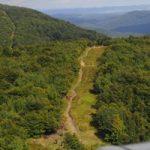 Four foreigners and two citizens of Ukraine crossed Ukrainian-Slovakian border during Easter holidays. First, a citizen of Vietnam and Ukrainian, probably assisting to get illegally to EU, were apprehended nearby the village of Topolya, in the neigbourhood of Snina. One Vietnamese and Indian were detained close to the village of Pryslip, Ukrainian crossing the border illegally was detained in Uglich village. According to the information of Departments of Border Guard Service and Migration Police of Sobrantse, all detainees were deported from Slovakia and banned to enter the country.