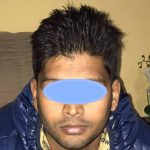 Indian has failed his trip to Hungary, who attempted to cross the border in the check point “Tysa” using someone’s passport of German citizen. In the course of the border control of the passengers from the regular bus “Kyiv-Vienna” the border detail had some doubts as to the authenticity of one of the provided documents. He was sent for thorough verification during which it was established that passport did not belong the bearer. Besides, it was learned that it does not provide a right to cross the state border, as in fact it was a document only confirming the deportation day transfer of the foreigner from Germany. The man providing this document was the citizen of India, as he explained later he intended to get to Germany in the search of better life. The violator was detained for identification and passed to Temporary Detention Centre of Chop Border Detachment. His further destiny will be defined by the court.