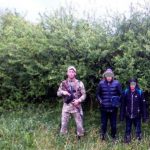 Seven illegal migrants were detained in the framework of the joint special operation “Border-2017” by the staff of State Border Guard Service and National Police. Two illegal migrants, who were trying to get over the border illegally to Romania, were detained in the evening by the border guards of BD “Dyakove”, Mukachevo Detachment. While patrolling the border patrol noticed two unknown persons moving towards the border. The border guards stopped the foreigners close to the settlement Zabolottya, Vynohradiv district, Transcarpathian region. The illegal travelers had not reached 500 metres. Detained men, aged 21 and 24 years old, did not have any documents and introduced to be the citizens of Syria.

Five more foreign migrants 5 were detained this morning by the soldiers of Chop Detachment together with the police officers. They had no any documents staying in the private appartment in Uzhgorod. All men told guards reported to the border guards that almost several days they stayed in Uzhgorod and expected for their smuggling to Slovakia in order later to get to Switzerland. Currently, the filtration measures continue, upon personality establishement they will be brought to administrative responsibility.