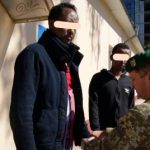 Two illegal migrants arrived from African continent were apprehended in Bukovyn by the border guards of Chernivtsi Detachment. District inspector of BD “Gertza” revealed two unfamiliar persons close to Ukrainian-Romanian border. The foreigners had no any identifying documents, however reported about their trip to EU. Currently, the foreigners were delivered to Temporary Detention Facility. Protocols were drawn up for preliminary citizens of Somalia for their attempt to cross the state borders, the case is forwarded to the court.