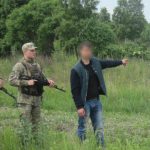 Border guards of BD “Sopych”, Sumy Detachment, apprehended a violator of the state border of Ukraine. Border patrol servicing close to the state border detected and detained the trespasser, who crossed the border from Russia. He walked beyond the check points. The man did not have any documents identifying his personality and introduced himself as the citizen of Moldova. Currently, the citizen is detained for identification, after he will be called to administrative responsibility for illegal cross of the state border.