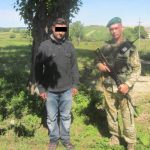 During patrolling close to border on Poland and Russia, the staff of State Border Guard Service apprehended citizens of Turkey and Russia. The violators were revealed by district inspector of Mostytskyi and Kharkiv Detachment. The citizen of Turkey was stopped in the suburb of the village Trushevychi. And Russian traveling to Ukraine beyond the check points was detained by the military men 10 meters before the Ukrainian-Russian border. So far, the violator was detained for performing verification actions and drawing up administrative materials.