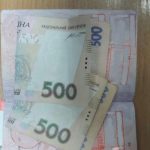 The foreigner, who exceeded the term of stay in Ukraine, was revealed by the border guards of Kharkiv Detachment in the check point “Kherson-air”. During control actions the border guards established that a passenger from one of the flights, citizen of Turkey, had exceeded his stay term in Ukraine. The foreigner offered the border guards a bribe in the sum of 1000 UAH for not drawing up the protocol. The border guards rejected to accept it and handed the offender to National Police due to the signs of criminal offence stipulated by Article 369 “Offer, promise or provision of illegal benefit to a service person” of Crime Code of Ukraine.