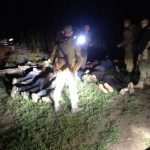 Border guards of Kharkiv detachment revealed and detected 13 Ukrainians attempting to cross the state border of Ukraine at night.

In the frames of joint operation “Border-2017” the border detail of border guards and operative staff noticed a motion of two unfamiliar vehicles towards the state border by means of thermal imaging device in the direction to the populated areas Okhrymivka (Ukraine) – Krasne (Russian Federation).  Starting to the place of detention, the law enforcers stopped one car 3 metres before the state border, in which there were twelve citizens. The other vehicle attempted to disappear from the place of offence to the rear of that area, and after some warning shots upward the car and one citizen were detained 30 metres before the border.

As it was established soon, all persons were the citizens of Ukraine, being the residents of Kharkiv region. Currently, Ukrainian are apprehended in administrative order for drawing up documents on attempt to cross the state border of Ukraine in illegal way. Source: