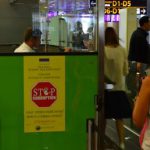 Two foreigners with forged documents were revealed by the border guards of Separate Check Point “Kyiv” in the Boryspil Airport.

So far, the person with false documents is not passed and returned by the flight to Turkey, the place he arrived from.