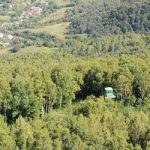 Policemen of Border Guard Control of Slovakian Police Office fixed a flight of small plane from Transcarpathia to Slovakia in Petrovcy.

As it was reported by the press-secretary of Police Office Denisa Balogova, on Thursday in the evening the Police officers noticed aircraft moving in a forbidden air space, flying low in unusual time.  Information about suspicious plane was sent to Operative Service with notification of all police patrols in this area.

Based on the call for number 158 it was established that the plane landed in Gatalove in the area of Mikhailovtse. When police patrols arrived the aircraft had already flew away, but there were 10 persons left after landing.

Policemen delivered foreigners to Border Control Police Department to learn all details of their trip to Slovakia. In the course of the interview they reported to be the citizens of India.

The further actions would result in readmission i.e their return to the territory of Ukraine. Investigation officer was send for to arrive to the place, where the case on smuggling and illegal migration of the state border to be examined.

Slovakian policemen informed State Border Guard Service of Ukraine about this fact immediately and a joint meeting was conducted, where it was negotiated about the further steps in investigation of this case.

Also, the Air Forces of Slovakian Republic were informed on this point.

In Chop Border Detachment it is supposed that the aircraft could fly up and land on the territory of Transcarpathia. However, there are no any doubts than it travelled through our region to EU and back.

As it was reported by the press-secretary of Chop Detachment, no information is still available about the aircraft, its type, places of its destination.

When the aircraft flew over the border, the Ukrainian border guards fixed the engine noise and informed Slovakian colleagues.  And arriving to the place of landing, the plane hit the skies, that it why they could not recognize it.

Border guards assume that the plane could have enough patrol and arrive, for example, from the neighbouring side. Thus, the actual search of it is practically impossible.