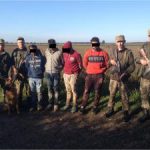 At night, the border guards of the Mukachevo Detachment detained four illegal migrants from India in the frames of special operation Border-2017. The men moving towards the neighboring country were revealed by the night vision device by the border detail of BD “Velyka Palad”. Realizing that they were exposed, illegal migrants tried to escape. In order to hold them back, the law enforcers had to make several warning shots up. Soon, at a distance of 70 meters before the state border, four men, aged 22 – 41, were detained. Detainees had no any documents. The travelers reported that they were citizens of India and intended to cross illegally the border on Hungary aiming at further improvement of their living conditions in one of the EU countries. The detainees were taken to the Border Unit. Currently, filtering and verification measures are undertaken; all the circumstances of the event are established. For an attempt to violate the state border the protocols were drawn up as to the detainees as on the administrative infringement, the case will be forwarded to the court.