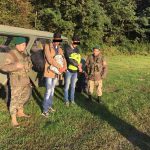 The staff of Border Guard Department revealed 6 foreigners at Ukrainian-Polish border, who intended to cross the state border in illegal way. Thus, the border guards of BD “Krakovets” received a call from a local resident seeing two unfamiliar persons in the suburb of the village. Soon, border guards of Mostytskyi Detachment detained 2 citizens of Morocco, YOB 1997, 400 m before the border. As it was established soon, they went to Poland on foot.

In addition, the border guards of BD “Verkhovyna Bystra”, Chop Detachment, apprehended 4 “travelers” from Bangladesh. They traveled to the neighboring country by the train “Uzhgorod-Syanki” without any corresponding documents. The foreigners were detained for circumstances establishments, the protocols on administrative infringement were drawn up provided for the Part 2 Article 204-1 of AICU.