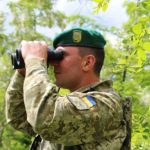 The border guards of the Sumy Detachment detained two Turkish citizens. Thus, the district inspector received operative information about possible illegal activities related to the smuggling persons across the state border of Ukraine in the direction of Miropolia (Ukraine) – Plokhov (RF). During the realization of this information, the border guards of BD “Krasnopillya”, found and subsequently detained two citizens of Turkey and one citizen of Ukraine on a Chevrolet car, a taxi service that brought foreigners to the state border, at a distance of about 5 meters from the Ukrainian-Russian border. The men had foreign passports of Turkish citizens. During the verification the border guards learned that they intended to violate the state border, but their attempt failed. Also, the law enforcer found that the foreign citizens entered the territory of Ukraine legally. The detainees were taken to the department of the Border Guard Service “Krasnopillya” for drawing up administrative procedural documents.