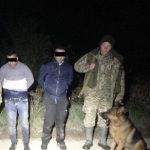 In the frames of operation “Border-2017” the border guards detained two illegal migrants from Morocco. When patrolling, the border guards of BD “Velyka Palad” found and detained two unknown persons aged 23 and 28 at a distance of about 100 meters from the Ukrainian-Hungarian border. The foreigners were travelling to a neighboring country, where they were exposed by means of a night vision device. The detainees had no any documents. The border guards of Mukachevo Detachment introduced themselves as the citizens of Morocco. In order to draw up protocols on administrative violations and conduct filtration measures as for these persons, they were taken to the Border Guard Service. At present, the measures are undertaken to establish the circle of persons involved in the organization of illegal migrants’ trip.