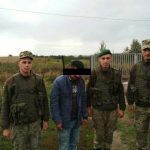 Joint special operation “Border-2017” continues – it is the fifth case for the week when border guards of Mostytskyi Detachment apprehend illegal migrants. Thus, the border guards of BD “Shegeni” detained a citizen of Turkey at Ukrainian-Polish border, who attempted to get over the border in illegal way. Border guards received information about the foreigner from the local inhabitants. The detainee was apprehended, when he was overcoming the barrage constructions. It was established that this man arrived to Ukraine legally – by plane, he had his national passport of the Turkish citizen. However, he decided to reach Poland avoiding the border control. The man will appear in the court for his attempt to cross the state border of Ukraine.

To the point, one more illegal migrant was detained in Uzhhorod. He failed to approach the border. The district inspector of Border Guard Service revealed a potential offended at the railway station. Thus, the undocumented citizen of Mongolia, instead of a trip to the EU countries, resides in the Temporary Detention Facility. Protocol as to Article 204-1 of ICU is drawn concerning him.