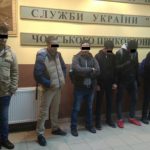 Six citizens of Yemen and a Soudanese were apprehended by the border guards at night in Uzhhorod.

The officers of Operative searching Department informed colleagues from BD “Uzhhorod” about appearance of some persons nearby the border. Thus, seven illegal migrants were revealed and detained on the district road. As it was established according to the detainees’ words they arrived from far away countries in order to get to the EU countries looking for job. So far, the violators are delivered to the Temporary Holding Facility, corresponding procedural documents are drawn up. Upon identification the detainees will be called to administrative responsibility under Part 2 Article 204-1 AICU “Violation or attempt to violate the state border”. Their further destiny will defined by the court.