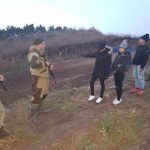 The staff of SBGS detained four illegal migrants nearby Ukrainian-Russian border. The group of migrants from Vietnam was revealed and 10 m before the state border by the border guards of BD “Vesele”, Kharkiv Detachment. The foreigner, YOB 1983, 1991, 1993 and 1997, illegally crossed Ukrainian-Russian border. Administrative protocols were drawn up under Article 204-1 of AICU as to the travelers. The SBGS fixes activation in smuggling of illegal migrants through the state border in Kharkiv region. Since the beginning of the current year it was the second group of illegal migrants from Vietnam attempting to get illegally to Ukraine.