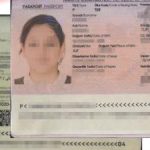 Citizen of Turkey together with her two children arrived by the flight from Istanbul to the Odessa airport. She provided Turkish passports for control. However, in the course of the verification the inspector doubted in their validity. Upon thorough examination of the documents the traveler confirmed the fact of the personal data forgery on the information page. Moreover, when examining the luggage of the detainee, the law enforcers found three passport documents of the citizens of Iraq belonging to these persons. And these passports were also not good as they contained forged visas of Ukraine. The border guards rejected Iraqi woman to cross the state border, the forged passports were confiscated, real Iraqi passports were stamped with “Ban to enter Ukraine” for three years. The woman and her children were returned by the back flight to Istanbul.