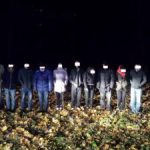 Ukrainian border guards often detain illegal migrants during their attempt to cross the Ukrainian-Russian border. The last case was a successful detection of illegal migrants entered Ukraine from the side of the RF in the area of the check point “Yunakivka”, Sumy Detachment. This time, in the course of information realization the officers of national and personal security of SBGSU detained 12 persons of Asian appearance without any documents – 9 men and 3 women. Currently, there are filtration measures undertaken, the representatives of SSU and National Police are informed.

Russian Federation has been used for many years as the starting point for illegal migrants to the EU countries. Due to a simple procedure on Russian visa granting, the illegal migrants arrive to the RF in unlawful way. Then they attempt to reach Ukraine beyond the check points. By means the national Diaspora, illegal migrants aim to settle in Ukraine or travel by transit to European Union. In the area of the Eastern Regional Administration there have already been 6 cases of illegal migrants’ detention, which traveled to Ukraine from the territory of the neighboring country. It testifies about the evident organized channel of illegal migrants’ smuggling.