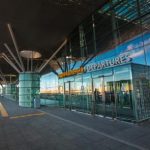 A citizen of the Netherlands tried to give a bribe of 2 thousand US dollars to the border guards of the Separate checkpoint “Kyiv” tonight at the Borispol Airport.

The man, born in 1964 followed by the flight to Tel-Aviv. After passing border control procedures, the foreigner turned to the staff of the Border Guard Service with a request to resolve the issue of his friends passing the border for the relevant cash reward. The  mediator offered 2 thousand dollars to the law enforcement officers. In the same amount man assessed “the scale of the problem” of two Iraqi citizens, who arrived by the flight earlier and could not cross the state border to Ukraine due to non-verification of their intended stay purpse. The Iraqis were rejected in admission and at that time they had already been expecting the return flight back. Perhaps they did not want to return home deciding to be involved in illegal shady business of his friend, for which ordinary journey turned into “adventure”.

Currently, on the fact of undue remuneration attempt, the border guards informed the employees of National Police.

Note that from the beginning of 2017, the border guards more than 1000 times refused the unlawful remuneration.