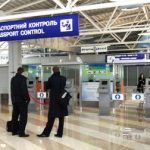 The passport documents with a “surprise” were provided by two Iranian to the policemen during the passengers’ check in for the flight “Colombo-Kiev”. For their journey they bought Turkish foreign passports of citizens of Sweden and Croatia from dealers for $3 000.  During the filtration activities and inspection of baggage, the valid passports of citizens of Iran were found in the personal stuff of the foreigners.

The citizens have already been returned by a back flight. The foreigners are banned to enterr the territory of Ukraine for the period of three years.