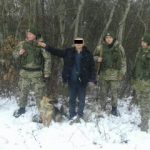 The resident of the village Shehyni reported to the local police inspector of the Border Guard Service about the movement of an unknown person near the state border. Already in fifteen minutes, the border guards of Mostyskyi Detachment detained the citizen of Turkey, who traveled to the neighboring country. The foreigner had the foreign passport.

So far, the Protocol on an administrative offense was drawn up concerning the detainee  under the Article 204-1 AICU (Illegal cross or attempt of illegal cross of the state border of Ukraine), and the citizen is in the Temporary Detention Facility for establishing the circumstances of the breach.