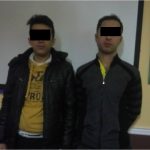 Two men tried to sneak over the state border to Hungary.

The Syrians were discovered by the joint efforts of the Police and SBGS according to the information provided by the Department of Internal Security of the State Border Guard Service.

The men were hiding in the cemetery near the village of Astei, Berehovo district. The men did not have any documents, they introduced themselves as the citizens of Syria and intended in the future to get to one of the countries of the European Union.

Illegal travelers were taken to the Border Division of SBGSU in order to prepare protocols on administrative protocols and perform filtration actions.