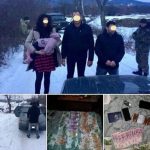 The Operative and Search Department of SBGS together with Department of Fight against Crimes connected with Human Trafficking, Head Department of National Police in Transcarpathian region detained illegal immigrants, quickly tracked down the man who organized the transportation of four citizens through the Ukrainian-Slovak border.

Four persons were stopped 800 meters before the state border near the village of Kamenetskaya Huta in Uzhhorod district. These were two men of 29 and 31 years, 27-year-old woman and a small child (nine-month-old girl). Illegal migrants did not have any documents, but introduced as the citizens of Armenia.

When the required procedural activities were performed in the Department of National Police the violators were taken to the Temporary Detention Facility of Chop Detachment. The guards will have to identify the illegal migrants, then they are to be brought to administrative responsibility under the Part 2 Article 204-1 AICU “Illegal cross or attempt of illegal cross of the state border of Ukraine”.

The Department of Fight against Crimes connected with Human Trafficking, and investigators of Uzhhorod District Police have carried out a series of quick searching actions and revealed the names of the smuggling organizer. The law enforcement authorities established that the foreigners attempted to enter the Slovak Republic with the assistance of a citizen of their country of origin. This 50-year-old man was detained in one of the hotels in Uzhhorod district. 7900 Euro and 1642 UAH were confiscated from this man as well as bank cards and other documents. The suspect person was detained under the Article 208 of Crime Code of Ukraine and placed to the Temporary Detention Facility.

The law enforcers took the illegal migrants to the Temporary Detention Facility of Chop Border Detachment. The criminal proceeding was initiated by this fact under the Part 2 Article 332 of the CCU, that is, illegal transfer of persons across the state border of Ukraine.

The further measures on establishment of all circumstances and persons involved in the infringement would be carried out by Operative and Search Sub-Department of SFSU.