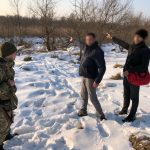 Two Turkish citizens, who were trying to violate the state border, were detained by the border guards Mostyskyi Detachment.

Last night the border guards of BD “Krakovets” received warning information from the operatives of BGS about a possible violation of the border. The border guards took measures to prevent offenses in this area of responsibility and soon the border detail noticed unknown persons. The law enforcers started to pursue two men walking in the direction of Poland, and 250 meters before the border the fugitives were caught. The detainees were the citizens of Turkey, born in 1981 and 1985. The foreigners arrived to Ukraine legally, for some period were residing in Lviv, and soon decided to continue their journey, but in illegal way.