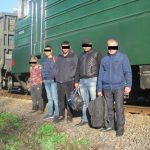 The border guards of Kharkiv Detachment together with the staff of Operative Department of Kharkiv Detachment detained five persons attempting to leave the territory of Ukraine by the freight train beyond the check point. The border guards received in advance information about the offenders’ agreement with the freight train team as to illegal transportation through Ukrainian-Russian border. The border guards started to the railway station in order to reveal and detain the violators. After a thorough examination of the train the law enforcers did not find the persons trying illegally to cross the state border. so, additional action were taken to find them.  In a result of further verification the border guards assisted by the service dog managed to find five persons nearby the village of Lyman 5 km before the railway station “Topoli”. On the offenders attempted to run away, however, the border guards detained him as well as all other travelers. Meanwhile, it was established that 3 citizen of Azerbaijan and 1 citizen of Uzbekistan accompanied by the Ukrainian entered into a plot with the team of the train for illegal cross of the state border beyond the check point because the Russian law enforcers banned their entrance to the RF. All detainees will be handed over to the National Police, their further destiny will be decided by the court. Notification about crime commitment was sent to the competent authorities under the Article 332 of the CCU “Illegal transportation of persons through the state border of Ukraine”.