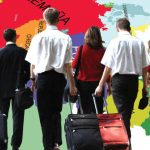 The American company Bloomberg conducted a study on the economic risks for Ukraine through labour migration to Poland, the Czech Republic and other European countries.

The study showed that Russian aggression in Donbass, constant devaluation and corruption has become the main reasons for the Ukrainians to seek work abroad, it written in the newspaper “Tyzhden”.

“Labour migration is one of the problems Ukraine faces today. It may become a serious risk for economic growth and price stability in the coming years”, – said the Deputy head of the National Bank of Ukraine Dmytro Sologub.

In particular, Ukraine has helped to overcome labor shortages from Prague to Warsaw after the movement freedom through the European Union and “luring” by higher wage made the citizens of these countries EN to move massively to a richer block.

“The foreign companies have no other choice. At first, they were looking for the employees with extensive experience and diplomas. Now, they hire everyone and spend a month training, if necessary”, – said the Ukrainian businessman Roman Pelekh, who recently opened its ninth  recruitment office being started in 2013.

In turn, the attractiveness for Ukrainian workers is understandable, because their cash reward at home amounts to 7 100 UAH ($265) per month compared to 3500 zloty ($1046) in Poland.

The reason for migration is a protracted conflict with the Russian occupiers, devaluation and constant corruption.

“There are 1.5 million Ukrainians registered in Poland and maybe another half a million are unregistered. In turn, the Czech Republic plans to double the annual quota for workers from Ukraine”, – it is stated in the publication.

It is noted that, for example, 37-year-old telecommunication engineer Andrew Kozlowski used his Polish origin, which helped him to move in 2014 to the city Gdina (Poland).

“The time has come when the war began, the hryvnia has fallen – I have always wanted to work abroad. I’m far from big money, but here it takes one year to earn what I was earning during four years at home,” he said.

In addition, according to the data of International Organization for Migration, 12% Ukrainians found foreign employment or are goint to realize it. The long-term picture also causes concern: the UN sees decline of the population to 36.4 million from 44.2 million by 2050.